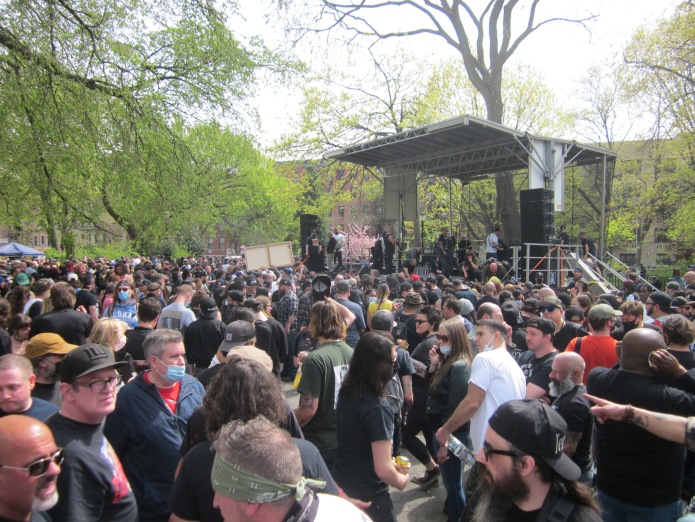 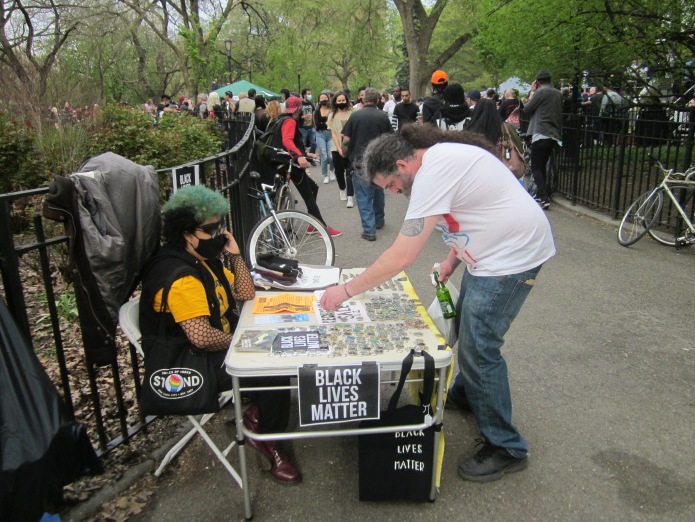 There was a hardcore concert at Tompkins Square Park this past weekend, which I thought was actually a punk rock concert or a heavy metal concert or both. And I know that there was a Black N’ Blue Productions hardcore concert at Tompkins Square Park this past weekend because this Facebook event invite says so, and all of these news articles that have since appeared as a result of that concert say so also. And it was a really big concert, so big that the crowd of concert goers , some wearing masks and some not wearing masks has since become a big to free your face or not to free your face debate.

And in between attempting to vend those Black Lives Matter I Can’t Breathe, Not My President, S#!t Just Got Real, Occupy Wall Street, No Police State, Tompkins Square Park, Union Square Park, Washington Square Park, Museum of Reclaimed Urban Space, The Shadow, Frida Kahlo, Yoga, Brooklyn and I Love New York necklaces, magnets, key chains and pins and Black Lives Matter hats and tote bags at this concert, it was seen that there were many other vendors at this concert, which almost seemed like a festival also.
Someone was handing out Defund The NYPD flyers on Avenue A in front of the park, the Hare Krishnas and Chilis on Wheels were serving food, East River Park Action. band merchandise tables and The Shadow had tables there also and there was even a yard sale going on during this really big concert.
And surely that was Clayton Patterson who was at this concert who finds himself in one of those photos posted above. And thanks @angieisallright for helping me to vend that Black Lives Matter jewelry at that table and chair from morus for one quick second.
And with future Shows in Tompkins Square Park possibly in jeopardy as a result of this really big concert, the concert schedule reads as follows:
“HEY KIDS! Put these TSP show dates for 2021 on your calendar:
> April 24: BLACK + BLUE PRODUCTIONS PRESENTS: MAD BALL – Murphy’s Law – Bloodclot – The Capturers. Donations will be accepted with a portion of the proceeds to go to New York Firefighters Burn Center Foundation
> May 8: A7 BACK TO THE NYHC ROOTS Record Release show: Antidote NYHC – Kings Never Die – The Last Stand – Crazy Eddie – The Car Bomb Parade – Reaching Out
> May 22: WASTE FEST 2: Brought to you by the fine folks of Urban Waste
> June 13: Sewage, Hammerbrain, Sea Monster and The Voluptuous Horror of Karen Black, with surprise guests!
> June 26: F-Bomb: Brought to you by Mike SOS
> July 10: F-Bomb: Brought to you by Mike SOS
> August 7 + 8: TSP RIOT REUNION > September 11: F-bomb: Brought to you by Mike SOS
> September 25: Something special brought to you by Black + Blue Productions
> October 9: F-Bomb: Brought to you by Mike SOS
> October 30: TSP HALLOWEEN show
And, as seen on Reddit:

Apparently punk rock stops the spread of Covid.
No masked needed while rocking out.
Everyone looks happy. That is nice
And as I type this blog post a few days later, there are now articles that read, Permits pulled for upcoming Tompkins Square Park shows following Madball show.
And There is a World Wide Demonstration 2.0 May 15 2021. We will do it again! Side by side – for Freedom & Human rights!
We are living in crazy times. And what, if anything, does this have to do with a No Police State. Have a great punk rock hardcore concert day and more. #blacklivesmatter
Standard 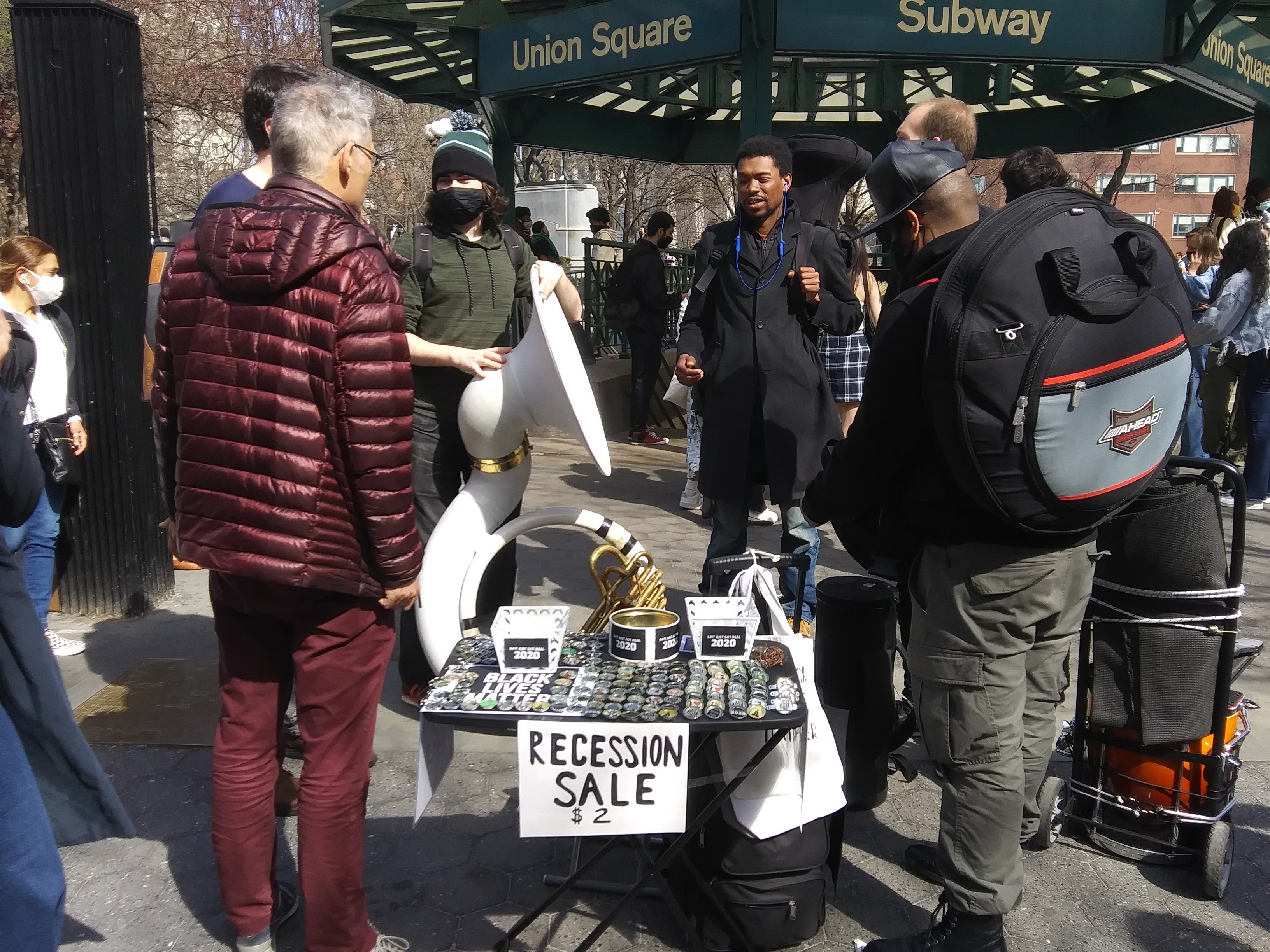 It’s been a while since I signed into this blog in an attempt to maintain web 2.0 user generated content for this blog and my other blagh whenever blagheers block possible, And during what seems like an end of the world panicdemic or at least an end of the world as we know it panicdemic  going on at the moment, I thought to post a few photos and videos seen in my attempt to vend black lives matter necklaces, magnets, key chains and pins for $2 each and Black Lives Matter tote bags somewhere in between Union Square Park and Washington Square Park in the New York City area the past few months or so.

And it was seen while vending Black Lives Matter jewelry at Union Square Park during the Union Square Greenmarket, or Union square Farmers Market, Underground Horns were busking near that Union Square subway entrance on this day.
And then it was seen again that Underground Horns were busking again at Union Square Park during that Union Square Farmers Market near that Gandhi statue. and there was also an anti vaccine rally there on this day.
And there was a World Wide Rally For Freedom, World Wide Demonstration & Stop Asian Hate March on one of these attempt to vend in the park days also. And that World wide rally for freedom- March 20 2021 event invite read something like:
World Wide Rally For Freedom

And according to their Facebook page, there is another World Wide Demonstration 2.0 May 15th, with text that reads like:
World Wide Demonstration 2.0
We will do it again!
Side by side – for Freedom & Human rights!
You will find all the details of the protests soon on our Website, on Telegram, Instagram or Facebook!
And lo and behold, I came across underground horns busking in that park yet again, and this time it was at Washington Square Park. And so I took A walk around Washington Square Park with Underground Horns brass band on this day.
And there was also a Justice For Jamarion Robinson memorial and rally on this day at Washington Square Park and there was also a Times Square Takeover to stop asian hate in Times Square this past weekend , which I guess brings me to this current date of today in the photos and videos that find themselves posted above.
underground horns is a 6 piece brass band playing afro funk bhangra new orleans latin grooves and beyond. Bring your dancing shoes if you happen to run across them. #blacklivesmatter
Standard
No Police State