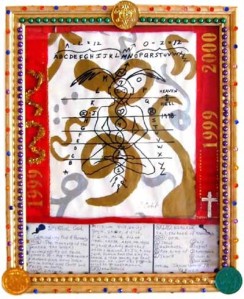 Now this is an interesting story. As I was getting my daily dose of world news today of all the daily atrocities of the world that are too innumerable to mention, enough cacophony and anomaly of atrocities on a daily basis to make me think that is the beginning of the end and then to turn off the news and pretend that none of the horrible news of the day stories exists in this information overload technological world we live in these days, I came across this headline: “Russians Wait For The End Of The World”. Hugh? Gog and Magog, what does it mean? And now my Armageddon, Apocalyptic, religious fanaticism thoughts start coming to mind again. Is this one of those top ten prophetic signs of the end of the world? Are Doomsday, Nostradamus, the Anti Christ, Jesus, World War III and the apocalypse on their way now? And this article went on to say something about that these people see the commercialization of the church, tax identification numbers and passports as the apocalyptic sign of the beast and do not go to school, watch television, listen to radio or handle money. They believe in spiritual and moral education. Now that’s interesting. Are these people the chosen ones? Who is to decide what is normal and what is not. This is yet one more story to be followed in the news today and tomorrow. And with that thought in mind, what’s that “Leonid meteor shower to peak this weekend” thing all about? How will the satellites fare in the sky? Will stars and angels fall out of the sky? Is this the dragon, that serpent of the sky whose seven heads and tail cast stars to the earth in Revelations or something? Is that constellation of shooting stars and angels going to be cast down to earth during that war in heaven? Is this a sign of the coming of the Messiah? Is Babylon falling? Is that some prophecy sign in heaven written in the stars also. Did Nostradamus predict this comet also? What exactly does that Leonid meteor shower mean, anything? Now maybe about this leonid meteor shower being a heavenly sign thing that I just came across, I may have been on the computer too long today and maybe it is time for me to turn it off and pretend I do not read the news in my religious and now astrological fanaticism. Does this Leonid meteor shower thing have to to do with that Pluto now being in Sagittarius galactic core season of change thing I wrote about a few blog postings ago? And what kind of season of change does this mean? According to that Leonid Meteor site above, Saturn the Great Millennial Sabbath, the Messianic planet and the grim reaper and his sickle may be near, if you believe.:

The Signs and the Seasons

In the month of May, 2000, we saw Saturn entering the sign of Taurus, the Bull. Seven years from that time, in 2007 A.D., Saturn – the “Messianic” planet — will enter the sign of Leo, the Lion – the Messianic Sign! In the year 2007 Saturn will begin to enter Leo, the Lion, and will also move through a conjunction with Regulus, the king star, between the feet of Leo, as the Hebrew calendar approaches Rash Hashanah.
Over the next seven years, from 2000 to 2007, Saturn will travel through the constellations that tell the story of the wrath of God being poured out upon an unbelieving world. That would be Taurus, the coming Judge; Gemini, which in ancient zodiacs tells the story of the Bridegroom and his bride; Cancer, the symbol of resurrection; and Leo, the lion pouncing on Hydra, a many-headed serpent. These constellations along with their sidereal sidepieces tell the story of the second advent of Jesus Christ”……The One with the sickle, who will harvest the earth, is Yeshua the Messiah — Leo the Lion, the “Lion of the tribe of Judah”!

Now that’s really interesting. And if it is the beginning of the end, will there is a tomorrow to follow this story. No one is free while others are oppressed. Is another world possible? What does this all mean? Lo and behold the yoga guy in the photo above. The yoga guy depicts the progression of humanity. And here is one of many secrets about the yoga guy above. A-L=12, halfway through the alphabet, O-Z=12, halfway through the alphabet. ALOZ, ALLAH. 12.21.2012, 0102. OLOZ, AL-OZ, ALOZ, ALLAH. M and N the middle of the alphabet = the Millennium, the head of Christ, Grist, the Holy Grail, The Holy Ghost, a thousand years shall Satan be let loose? (Yahweh,Yeshua,Jehovah,JHVH,YHVH,YHWH, YOGA), part of the trinity. Watch and be ready. If you believe. And what does this have to do with a No Police State?

3 thoughts on “The End Of The World?”