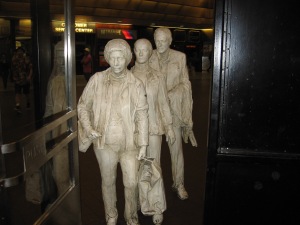 And I have heard it said that the only thing constant is change. And some stories do not end as you expect. And in between blaghing about all things #KaliefBrowder, #SandraBland, Black Lives Matter, Occupy Wall Street and beyond, and with that Google page rank update still sending me in search of a fifth full time job for when that get rich internet quick does not get rich internet quick. This blog post happens to be one of those off the wall, out of the blue, from left field posts, I think, that may have nothing to do with a No Police State, or maybe it does, who knows. This is one of those posts that has to do with real estate, the economy and change, kind of like one of those Vanishing New York posts, only this one is about Things That Aren’t There Anymore: Central NJ Edition, or at least things that won’t be there in the coming months, Northern New Jersey Edition. And does this mean that you’ve become one of those New Jersey people when you start blaghing about all things New Jersey. And I have always thought that when one crosses that New York, New Jersey interstate line, that it becomes a completely different commuter world, seemingly for generations to come. And so word on the street is that Food Basics in New Jersey, and also that Chase Bank next door to it in that New Jersey Plaza are closing in the coming months. And what’s up with that “For more information on A&P Stores sales and bankruptcy statement to be found on that Food Basics website I am not exactly sure, though this impending closing news wouldn’t be such news to me if I didn’t find myself passing by these places every so often. And from what I hear, this Food Basics lot, used to be Two Guys Department Stores years ago. Do you remember when? And then there is that The shemittah and financial collapse article that has something to do with releasing of debts every seven years, and blood moons, that in my paranoia conspiracy theories has me wondering if this is the beginning of another economic collapse, not since that mortgage meltdown a few years ago, doomsday, the beginning of the end, again, or something like that. And when the stores all around you start to close, you start to wonder if this shemittah and financial collapse stuff is true. Are stores starting to close worldwide, nationwide? And what will become of these places when they close, another chain store, another strip mall, condos, abandoned? Are these changes reflected across the nation? Is this just another story of gentrification, white flight, no not white flight…, genocide, a war zone, blight, urban renewal? And what else is there to say about this real estate situation that has not already been said in this kind of real estate situation time. Have a great impending development, impending shemittah and changing times day.