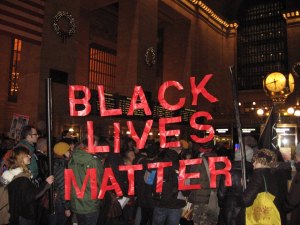 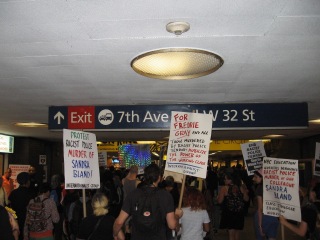 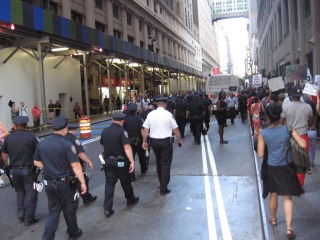 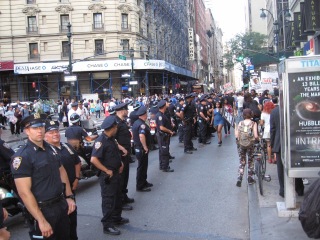 And on this day finds itself as Occupy Wall Street day one thousand and something. And Occupy Wall Street is still moving fast, I think. And also on this day, Black Lives Matter is still moving fast. And on this day MILLION PEOPLE’S MARCH AGAINST: Police Brutality,Racial Injustice, and Economic Inequality is also happening in that city of Newark in that state of New Jersey. And this event is another one of those seemingly a bazillion and more #blacklivesmatter events for all things police brutality and beyond. And according to that Facebook event invite for that Million People’s March, this event describes itself as:

Police brutality is an ongoing, growing and deadly problem in the United States Of America.

It includes the unwarranted and unjustified killing of unarmed people, the use of excessive force, the violation of peoples’ constitutional rights, racist and discriminatory practices, criminal activity, corruption and misconduct, increased militarization of police forces, and the failure of the criminal justice system to hold police accountable.

Police brutality is not an isolated problem. It is a historical problem with roots that are deep in the social fabric of this country. It must be seen within the broader context of racial and economic injustice and inequality.

While the victims of police brutality come from all racial groups in society, the vast majority come from African American, Latino, Native American and other communities of color. They are overwhelmingly poor and working class. Michael Brown, Eric Garner, Abdul Kamal, Kashad Ashford, and Rekia Boyd are among the recent victims.

Police brutality has been and continues to be the cause of social unrest in the country. Throughout contemporary US history incidents of police brutality have sparked explosive episodes of civil rebellion and unrest, with the most recent being that of Ferguson, Missouri.

The failure of the criminal justice system to hold police officers accountable is causing a political crisis as more people discover that police brutality goes unpunished. Police kill unarmed civilians and are not even charged.

One grand jury after another fails to indict police officers. The cases of Michael Brown and Eric Garner being the most recent examples. This is perpetuating a growing belief that the criminal justice system is racist and illegitimate.

Police brutality is a serious and longstanding problem. For decades attempts have been made to reform the police. These efforts have only been successful when tremendous sustained political and social pressure have been brought to bear upon the appropriate government institutions.

For these reasons the People’s Organization For Progress (POP) is calling a MILLION PEOPLE’S MARCH Against Police Brutality, Racial Injustice, And Economic Inequality. We will march to demand an end to police brutality and justice for all of its victims, police reform, and an end to the problems of racial injustice and economic inequality which lead to police brutality.
Lawrence Hamm
Chairman, People’s Organization for Progress

Peoples Power Assemblies will meet at Union Square Wednesday (7/22) at 5pm to demand justice for Sandra Bland, Kindra Chapman and all others killed by racist police terror.

And so there was a rally and a march as part of this event, that seemed to be accompanied by a wall of polizei two or three feet deep at every police state step along the way. And so they rallied, they spoke, about all things Sandra Bland and Kindra Chapman and police brutality and beyond. And then they marched, from Union Square Park to 34th Street Penn Station, to 34th Street and 5th Avenue, where protesters were arrested as in that Protesters Arrested @ Justice For Sandra Bland and Kindra Chapman YouTube video and photos from this event that finds themselves posted above, and then continuing on toGrand Central Station where there was a Die – In. And where this march continued or not continued after this event on this day I am not exactly sure. Though the list of Occupy Wall Street and Black Lives Matter events seem to go on and on. Is another world possible. No one is free when others are oppressed. And what does this have to do with a No Police State.