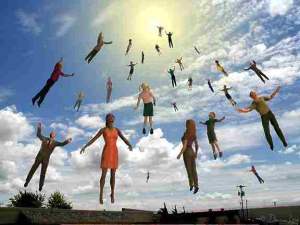 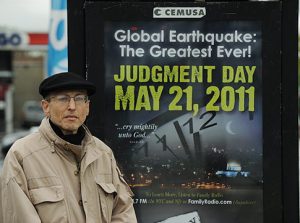 Wow! And now that Blogger will let me blog again….. I am able to blagh. So what’s up with this end of the world Family Radio, May 21, 2011, Judgement Day thing that’s been in the news a lot lately with titles like, “21 Reasons Why May 21 Is Not The End Of The World“, “The End Of The World As He Knows It“,”May 21 And Other Judgement Days That have Come and Gone“, and a bunch of other news article titles that are to be found in internetland on this subject. Is the world really ending May 21? Is Jesus returning to planet earth soon, real soon? Do we have to wait until May 22nd to see? Is this another one of those Y2k things? Is this some sort of publicity stunt? And what about December 21st, 2012? Was the Mayan calendar wrong? An no further comment on this commentary, except for this NY Daily News article below that I came across during my internet travels. And even though the names may have changed, the story stays the same, I think.

Someone is so convinced the end is near he’s betting his life savings on it.

The retired MTA employee has pumped $140,000 into a NYC Transit ad campaign to warn everyone the world will end next Saturday.

“Global Earthquake! The Greatest Ever – Judgment Day: May 21,” the ad declares above a placid picture of night over Jerusalem with a clock that’s about to strike midnight.

“I’m trying to warn people about what’s coming,” the 60-year-old Staten Island resident said. “People who have an understanding [of end times] have an obligation to warn everyone.”

His doomsday warning has appeared on 1,000 placards on subway cars, at a cost of $90,000, and at bus shelters around the city, for $50,000 more.
Fitzpatrick’s millenial mania began after he retired in 2006 and began listening to California evangelist Harold Camping‘s “end of days” predictions.

Using head-spinning numerological calculations, Camping has determined that the world will end on Saturday, May 21. He’s used similar biblical math to pinpoint when Abraham was circumcised (2068 B.C.) and when earth was created (11,083 B.C.).

Camping has predicted the end of world once before – on Sept. 6, 1994. When the sun rose on Sept. 7, Camping admitted he might have had that one wrong.

Still, Fitzpatrick remains convinced the beginning of the end is coming next week.

“It’ll start just before midnight, Jerusalem time: It’ll be instantaneous and global,” he said. “There are too many scriptures talking about ‘sudden destruction.'”

While Jesus Christ returns to Earth and all non-believers burn in eternal hellfire, Fitzpatrick says he and all those in the know will be saved in the rapture.

Similarly convinced followers around the city have taken it upon themselves to spread Camping’s doomsday prediction to anyone who will listen.

“We’re just heeding the warning God gives in Ezekiel 33 that God has appointed true believers as watchmen,” said someone of Harrison, N.J., as he handed out literature with fellow believers in Union Square this week.

Most dismissed the warning as the ranting of lunatics.

“I’m curious to see what they’re going to say in a week when nothing happens,” said someone else, of Prospect Heights, rolling her eyes as she passed the group in Union Square.

Camping’s group bought billboards in other parts of the country around Christmas time, but Fitzgerald is financing the New York ad campaign on his own, saying he wants to take as many people with him as he can.

The MTA says they have no problem with it.

“It’s an individual’s prerogative to spend their money as they see fit,” said MTA spokesman a spokesperson for MTA.

Anti-religion groups say the MTA should never have allowed the ad blitz.

“Doomsday cults are money-making enterprises,” said someone, of the American Atheists group, which ran counter-ads to Camping’s earlier billboard campaign.

“I wonder what is going to happen on May 22 when people no longer have their possessions or their savings and we are all still here and they don’t have their rapture,” he said.

this person said there’s no chance that will happen and he has had no doubt about plunking down his retirement.

“It is the date,” he insisted.

Not that he’s been able to convince everyone.

“My sister doesn’t believe it,” he admitted. “I’ve tried to tell her. But that’s pretty much the story with most people.”