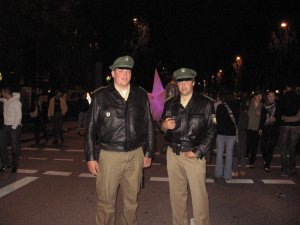 And somehow I have found myself on the other side of the world this day from that City of New York that I usually dwell in, to the city of München, Munich, Germany on one of those travail vacations that I usually blah blog about. And I thought to attempt to blahg my vacation travail travels as I usually see those other bloggers do out there in bloggerland. And everything seems different over here in Munichland. And it is the language that I do not really understand, and even the computer that I am blogging on in my blogaholicness seems different with keys, symbols and letters placed everywhere different on the keyboard that I am not used to viewing on my usual computer that I use in my blogaholicness. And so I thought to post a photo of my travels throughout this foreign land to me. And that photo above is of the polizei in Munich. And how funny it is to me as one of those wayfaring travelling tourists to ask the polizei if they could take a photo for my camera. And they did, and how amazing to me. And in New york I am not sure if I think of the police as officer friendlies. And here as a tourist, they could seem officer friendly, and I am not sure as they carry guns all the same. And the polizei police seem to be way more fewer and far between in Munich than in New york, where the police seem to be located every other step and a bazillion police for every civilian. And as in Munchen it seems as if I could go a whole day outside without seeing one polizei, unheard of in that police state of New York where one sees a police every single step outside it seems. And what freedom could feel like if there were no polizei at all on planet earth at all, or at least no guns on planet earth. And this photo was taken at the Streetlife festival 2008, Corso Leopold, Ludwig und Leopoldstrasße, on Leopald Street as I would say in engish, whatever that phrase could mean. Die längste autofreie Flaniermeile der Stadt mit Schwabings Kunstboulevard, whatever the phrase cuold mean in English also. And that festival was really cool to see, of more photos I would like to post of it. And I am not really sure what else I can blah blog about in this post except to write have a great travelling day wherever one may be on planet earth and also, and what does this have to do with a No Police State?

One thought on “Grüße aus Munich”